This was a wake-up call, not a walk-out, to the Global Partnership 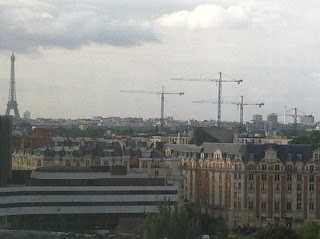 If I push my face right up to the window of my hotel room, I can just about see the Eiffel Tower rise high above Paris’s cityscape. Just below me is the Seine. And behind me, out of view, lies the office complex of La Défense and its modern-day Arche de Triomphe.
The contrast between the two visions – traditional and modern – is striking.
For the past week, I have been here in Paris preparing for, and then participating in, the final meeting of the Working Party on Aid Effectiveness (WP-EFF).
Since 2003, the WP-EFF has led a series of High Level Forums on Aid Effectiveness (HLF), initially among OECD donors and partner governments, and more recently a much broader range of development actors. The HLFs produced the seminal Paris Declaration (PD) in 2005, the Accra Agenda for Action (AAA) in 2008, and more recently, the Busan Partnership for Effective Development Cooperation (BPd) in 2011.
While Busan did move the agenda forward, for the past six months civil society has been keenly observing and participating in the work of the Post-Busan Interim Group (PBIG). The PBIG was tasked with the design of the global monitoring framework and indicators for assessing progress on Busan, and the governance framework of the Global Partnership for Effective Development Cooperation (GPEDC).

This final meeting was to discuss and finalize the PBIG proposals and launch the new Global Partnership, the WP-EFF’s successor.

For me personally, this has just been a journey over the past year and a half, but for many of my colleagues here they have been following the trajectory of the WP-EFF and developments around aid effectiveness as far back as 2005.

Back then there were 17 people protesting out on the streets. Today there were 35 of us participating inside the room. 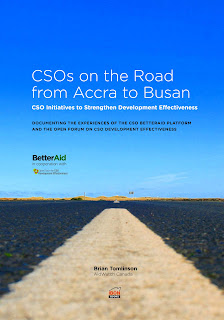 This past week, we managed to get a bit of a taste of how far we have come since Paris. On Wednesday, as it did for HLF-3 in Accra, BetterAid released a book documenting the accomplishments, experiences, assessment and outcomes of what we achieved between HLF-3 and HLF-4 in Busan.
Separate from that book, people here feel that In Accra, we were encouraged by the promises made by governments for an enabling environment, for human rights, decent work, sustainable environment and gender equality. And we welcomed our inclusion after Accra as independent development actors in our own right and as full members of the Working Party.

Through BetterAid, we advocated for a human rights framework for development, gender equality, decent work and environmental sustainability. Through the Open Forum for CSO Development Effectiveness, we created the Istanbul Principles and the Siem Reap CSO International Framework.
At Busan we made some small progress – as well as suffered some big losses - both in terms of substance and process, engaging for the first time technically as an equal negotiator at the table.

And in Busan, while we recognized the incremental changes we had made, it felt like everything was still contingent on these coming six months.
In that vein, I guess the past two days have been a success.
The Working Party adopted the mandate and governance of the Global Partnership, with periodic Ministerial-level meetings, and a process driven by a Steering Committee of 18 - with a seat for civil society and co-Chaired by Andrew Mitchell, British Secretary of State for International Development. Two co-Chairs – from emerging economies and partner countries (likely Africa) – still have to be nominated by the end of July, as do ten of the other Steering Committee members.  (The North American seat will be taken by Donald Steinberg, US Administrator of USAID, with Canada opting to take the next rotation following the first Ministerial meeting of the Global Partnership in 2014.) The prospect of a possible observer seat for local government and trade unions has been kicked to the first Steering Committee meetings, likely to occur sometime this fall.

The monitoring framework and a set of 10 indicators - that will be used to assess progress on the commitments made in Busan - were also endorsed, using baselines of 2010 to measure progress. The indicators include a focus on inclusive country processes to determine results, enabling environment for CSOs, the contribution of the private sector to development, transparency, predictability, reporting of aid through budgets, mutual accountability, gender equality and women’s empowerment, effective institutions and the use of country systems, and untying aid. Wherever possible, the indicators are drawing on existing sources of data.  The Joint Support Team to the Steering Committee – UNDP and the OECD – still have to determine how to actually operationalize the agreed indicators.

Also endorsed at the meeting was a framework for a common open standard on transparency as agreed in Busan. This standard will ultimately join together the standard of the International Aid Transparency Initiative (IATI), which Canada signed on to at HLF4, and the OECD’s Creditor Reporting System. IATI is an aid data standard, whereby signatories provide detailed comparable information in an open data format. The CRS is also an open data database on donor aid spending produced by the Development Assistance Committee (DAC) at the OECD. Whereas the CRS provides historical annual OECD donor data on aid flows, IATI allows users to dig down deeper into past, current and forward-looking spending at the project level (including narrative reports). The two standards will now be completely aligned and integrated, allowing for a single electronic reporting standard over the full range of aid spending for all donors, including CSOs as donors.

But while some of the outcomes seem positive, the past two days have left a sour taste in the mouth of many of the CSOs – and others – here.

Why? Perhaps not surprisingly, this first full gathering since Busan of WP-EFF members felt much less like the final negotiation of the Global Partnership, than a party for the Working Party. It began with somewhat mindless panels (about changing mindsets), high-level speakers giving warm and fuzzy speeches, and farewell parties. This is perhaps warranted to some extent given what the WP-EFF has achieved.

But as a result, it provided barely any opportunity to debate proposed changes to the proposals on monitoring and governance that had been drafted by the 18 members of the PBIG. Every amendment from CSOs, from NEPAD or CARICOM was responded to by the Chair with the resounding thud of a rubber stamp on the original proposal.

This hit a nerve for all of us in BetterAid – as well as partner countries, and some other stakeholders. So following the morning’s opening panel with OECD Secretary General Angel Gurria and Secretary of State Mitchell, the two BetterAid co-Chairs made a constructive statement to the Working Party addressing a sentiment that has been mounting and finally crystallized here in Paris. In short,

“The past six months have confirmed our belief that since Busan the multi-stakeholder nature of this forum has itself been compromised. It is not a global partnership, interested in generating consensus and compromise among the range of stakeholders – whether us or others. [...] At this point, we have elected to go back to our respective constituencies – more than 5,000 networks and organizations - to see whether we should continue to engage in this Global Partnership, and what the basis of that continued engagement should be. We remain committed to the spirit and principles of Busan.  For us, that means moving beyond paternalism and power imbalances to inclusive partnership and mutual respect.”

We are at the table, sure, but it is still a process led by three governmental co-Chairs, who can simply choose to replicate the experience of the past six months. And that is not a position we want to be in.

Various officials over the past few days have underscored time and time again the benefits and legitimacy that having civil society at the table has brought to this process.

It is great that these officials can see the benefits of having us there. We need to be able to see the benefits too. And for us, that means having a co-Chair and a seat for trade unions.
As I said at the beginning, from my window I can only see the old Paris out my window. But I can’t quite see the new.